The fig is a deciduous shrub or small tree with a height of 3-10 meters, which blooms three times a year. Its green, brown or purple fruits are botanically a fruit compound containing many small drupes in fleshy inflorescences. Figs are among the oldest cultivated fruits in the world. In antiquity, they were grown throughout the Mediterranean and were a staple food. The name ‘Carica’ comes from the ancient name of a region in Asia Minor. The fig was said to have aphrodisiac properties and has been considered a symbol of fertility in many cultures. The Bible also mentions figs, though with a different symbolism: when Adam and Eve ate from the tree of knowledge, they became aware of their nakedness. They put fig leaves together and made themselves a frock (Genesis 3:7). The fig leaf is thus also a metaphor for the act of covering the body in shame.

The fig is easy on the soil and thrives in low-rainfall areas, but needs warm summers and mild winters. The fruit is sensitive to excessive moisture. All fig species rely on special wasps to pollinate. The edible fig tree has only female flowers, whereas the inedible fig tree is functionally the male plant. The pollination is done in symbiosis with gall wasps, which are only 2-3 millimeters in size and which deposit their eggs in the flowers of the male tree. After their development, the flightless male wasps mate with the females while still in the inflorescences. Before leaving the figs, the female wasps collect the pollen of the male fig flower and carry it to the female flowers of the edible fig, so that the fruit can mature.

Even today, figs are mostly cultivated in the Mediterranean and produce about 130,000 tons of dried figs annually. The main supplier countries are Turkey with approx. 70,000 tons and Iran with approx. 20,000 tons. The Turkish Smyrna fig is big, soft and intense in taste. From Iran come small dwarf figs. In the bakery industry, dried figs are used in fruit breads, and in the confectionery industry, fig paste is used in biscuits and gingerbread. 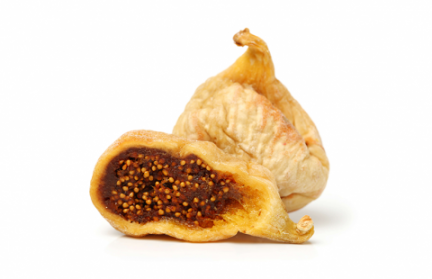